A Glimpse of Optimism

Finally, after months of pessimism, a glimpse of optimism has emerged! I shall explain myself.
For months, the policy mix has been striving for an internal devaluation. That has resulted to massive wage cuts in both the public (fiscal tightening) and the private sector (devaluation for competitiveness gain) affecting GDP by devastating consumption. However, although demand has dampen the supply side (product and services – retail) has been very reluctant to cut prices, pressured by VAT, income tax and other rising costs (fiscal tightening). So far, many commentators, analysts and economists and some politicians (liberal mostly) have been arguing that the free markets are stalling, not working properly.

The glimpse of optimism

First of all, for the free markets to operate as such there is a need for free competition (from the supply side) and rational buyers (from the demand side). A rational buyer will ask for a lower price, in situations like these and in a competitive environment the supply side will respond in order to protect market share and survive the depression by lowering its operating costs and retail prices while trying to retain some profit margin. This, in our case has been a very slow process. “And yet it moves” as Galileo allegedly whispered after publicly renouncing his theory that the Earth moved around the Sun.
In our office building block, there are two coffee shops at the street side. The one is an older establishment, over a decade old and the other, the newer one, has opened soon after the first signs of the recession at a time when sentiment was still out of contact with the realities. Those corner-shops, because they offer quick launch options at below restaurant-range prices have mushroomed in the downtown area during the past two years, as for each one closing almost two were emerging. 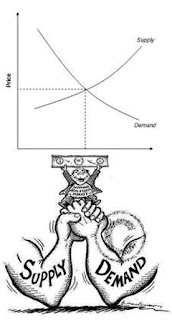 Their coffee prices have followed this paradoxical trajectory that drove many to the hasty conclusion that markets don’t work. In the begging months of the crisis prices were rising adjusting to their increased operating costs. Then, for many months, deeper into this depression, they kept those prices stable absorbing the latest VAT hikes and other operating cost increases. However, none of them was yielding to any price reductions, the sort of thing you expect in a situation like this (the case for duopoly and cartel like pricing). Then, one day, the older one decided to cut 10% from delivery price for a cappuccino coffee. A week later, the newcomer responded with a significant cut in its coffee price, some 31% reduction. For a day or two, nothing happened. Some customers switched to the cheaper one but many others remained seemingly unimpressed by the move until one day.
Today is that day. In the morning, as I was passing through, I heard some saying “Kostas look, we buy our coffee from you for ages but you see the other one is much cheaper now and as things are, we are not in a position to ignore it anymore as our salaries have been cut, twice (in some cases) and we need to save as much as possible.”
An hour later, the delivery boy from Kostas’ coffee shop arrived with a message: new price for your company. A mere 31% discount! (Matching the lower price of the competition) At last, free markets work, indeed! It might take a while but it has to have both sides taking part; the supplier with its price power and the customer with its power of choice and furthermore the willingness to exercise this power and negotiate for a lower price. However, this is effective only in a competitive environment with many products and services that are substitutable.
This doesn’t mean we are out of the woods, yet. GDP will further fall as a result of this internal devaluation but lowering the price will help turn consumer sentiment and this will be the catalyst for the re-start in the economy. This is part of the bottoming process. It is a new begging, a glimpse of optimism at last!
PS. The cost of a cappuccino coffee is still pricy at €1.50
Αναρτήθηκε από GL στις 12:36