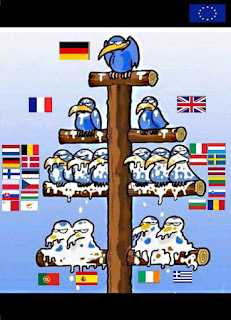 The real fear is German Constitutional Court (GCC), while allowing the German President to sign off on the ESM, (thereby making it effective), may impose some restrictive conditions too. It should be noted that, in the past, the GCC has imposed conditions, which has set a precedent for all to see. The main reason for this concern is as follows. The ESM, which will have a max capital of E500bn at best, has insufficient firepower to undertake its task. Its resources must be increased. The EZ countries will not/can’t, in a number of cases, contribute more. As a result, the ESM must leverage itself, either through obtaining a banking license and then borrowing cheaply from the ECB (as is the case with the European Investment bank, which, by the way lends directly to governments), or through the issue of bonds which is purchased by the market, though possibly by the ECB as well. The German’s have steadfastly opposed this idea, though it is “clear” (to the author) that Merkel, privately, will not oppose such a measure. To date, her opposition has been for domestic public consumption, rather than otherwise. The judges at the GCC will surely know that and may, for example, force Germany to seek prior approval from the Bundestag, God forbid the consent of the Bundesbank or limit Germany’s exposure in some way, unless approved by the Bundestag/Bundebank/the people, etc. If this or something similar is the decision by the GCC, uncertainty will prevail. Medium to longer term bond yields of the peripheral EZ countries will rise (soar?) and unless resolved, these countries will be forced, yet again, to borrow at the short end (given ECB support), which clearly is untenable.