The cost of our own blind folly

What a difference a year makes! 12 months ago we were contemplating "exodus" to the markets and now we hope to avoid "exodus" from the Eurozone ...

Here follows an exercise of numbers. It is an analyses of cost of debt based on real market yields and a simple allocation between bonds and t-bills. This exercise was prepared to depict the true implications of (our own blind folly as Homer would put it):

a) the failure of former government to close the review and secure the return to normalcy (access to money markets) and/or an auxiliary funding source through the transformation of the unused HFSF funds into a precautionary funding line (ECCL), and of

b) the failure of the new government to come in terms with the realities of 21st century politics and economics in the fragile environment of an economy that has just undergone a cruel but necessary fiscal adjustment, has lost over 25% of its GDP in the process of doing so and has acquired, as a result, a third world-like-unemployment situation.

The result is an absolute disaster that makes Grecovery impossible! 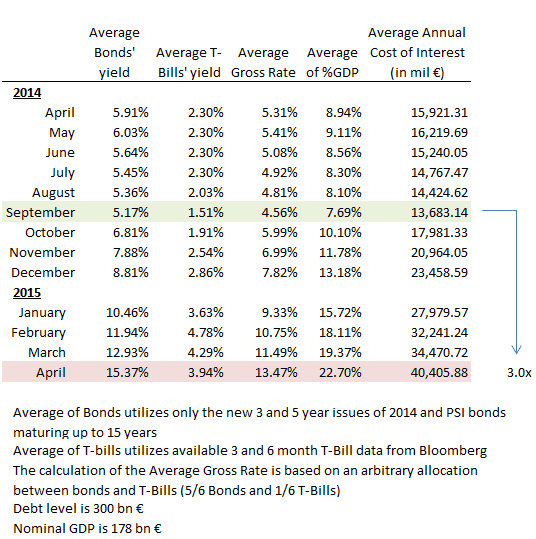 Much like in Homer's Odyssey, we must now muddle through another epic journey to the unknown.

[1] Tell me, O Muse, of the man of many devices, who wandered full many ways after he had sacked the sacred citadel of Troy. Many were the men whose cities he saw and whose mind he learned, aye, and many the woes he suffered in his heart upon the sea, [5] seeking to win his own life and the return of his comrades. Yet even so he saved not his comrades, though he desired it sore, for through their own blind folly they perished—fools, who devoured the kine of Helios Hyperion; but he took from them the day of their returning.

[30] ....... (Zeus) "Look you now, how ready mortals are to blame the gods. It is from us, they say, that evils come, but they even of themselves, through their own blind folly, have sorrows beyond that which is ordained."