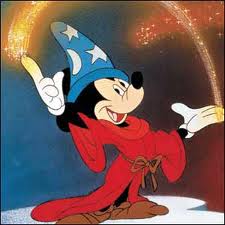 In Disney’s masterpiece Fantasia, Mickey Mouse, the Sorcerer's Apprentice is tired of fetching water by pail. When the sorcerer departs from his workshop, he seizes the opportunity and enchants a broom to do the work for him using magic in which he is not yet fully trained. He gets mesmerized by his newfound powers but soon the floor is awash with water. The apprentice realizes that he cannot stop the broom because he does not know how.
Not knowing how to control the enchanted broom, the apprentice cuts it in pieces with an axe. However, instead of stopping it, each of the pieces becomes a new broom and takes up a pail and continues fetching water, now at twice the speed. When all seems lost, the sorcerer returns and in a “biblical” fashion he quickly breaks the spell and saves the day.
The story is based on Goethe’s poem “Der Zauberlehrling”, written in 1797. It is a very graphical representation of a situation where someone overwhelmed by his problems summons the help of others –allies in politics- that he cannot control. Soon he realizes that he ends up with a far worse mess than the one he was trying to resolve in the beginning. Sounds familiar? Probably yes!
But there is another lesson to be learned. That is “don’t mess with things you don’t fully understand”. For example; it is very self assuring to think that a magical solution exists for Greece’s troubles.
“We first curtail the remaining public debt; then we erase all the conditions (MOU’s) and relevant legislation and because we are young and innocent we will renegotiate our magic with the universe from scratch. And if that was not enough, because we want it the universe will conspire to make it happen.”
But this doesn’t happen, even in fairytales and poems; why will it happen in real life?
And now a real life question: assuming you are wrong and the universe doesn’t conspire to make it happen. What happens next? Is there an old sorcerer to save the day? Is there a “Deus ex machina” to save us all? Not really unless you are Euripides or Goethe or a Mickey Mouse apprentice.
Αναρτήθηκε από GL στις 13:47