Everything that matters is Greek

(as well as everything that ever mattered) 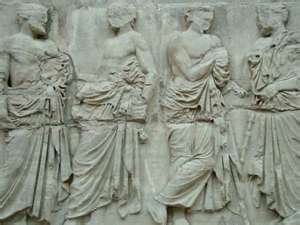 We reserve the right to be God’s chosen ones. The Hellines of our ancient glory. Actually that was our ancestors’ glory but we have managed to make a living out of it adding almost nothing to the world.
Macedonia is Greek, the western civilization is Greek, Democracy is Greek, the Aegean is Greek but the others should protect us. Thus we don’t owe to anyone and everyone should adhere to our beliefs because … it’s our Divine “right” and privilege. All the others, literally all the others except us, come second. I’m fed up with this b/s and I am Greek!

No they aren’t but get it over and done with!

Who wants to be like us? Italy is not Greece, Spain is not Greece, Ireland is not Greece, Portugal is not Greece, Cyprus is not Greece (LOL), the US is not Greece, and everyone would like to say they are not Greece! However, the British (Museum) hold our marbles, the Slav neighbours want to be Macedonians, the Turks advertise their ancient heritage on Asia Minor, the Germans built their mind set on Logic and their buildings with Greek style colonnades, and democracy is still aspired as the best available political system. We all share philosophy, philanthropy and so many other Greek origin words like austerity (Αυστηρός).

What have we done with our glorious heritage? Nothing, at all! Yet, we want to keep it to ourselves instead of sharing it with as many as we can. We worry about Upper Macedonia because there is a lower one as well. Well, isn’t it so? They say they speak Macedonian! Who cares! Yes, if they claim you can’t use the term because they are the owners of it that changes things a bit but none-the-less, who cares? It won’t matter unless we become irrelevant!

In the Americas, the true Americans are the “Indians” and not the settlers. However, that has been settled now. You cannot withhold to your great past unless you are great yourself and powerful enough to be free. There is no liberty without economic liberty, said former UK PM Thatcher (1925-2013). In the past, we had almost lost our heritage. However, because of the philhellenism movement and the right historic circumstances we resurrected Greece. Let’s not get lost into obliviousness yet again.
Αναρτήθηκε από GL στις 18:35