Another Way to Look at Things

An Abstract (by GL) based on Stephen King’s “Germany is in clover thanks to this crisis”.

(read full article)
Stephen King writes in a post dated May 24th.
[ Germany is in clover thanks to this crisis. Low interest rates and booming property prices are down to southern pain, not hard work.
Greece has become a convenient scapegoat. Yet to blame Greece alone for the eurozone's woes is absurd. Plenty of other nations have broken the fiscal rules. And there has been no shortage of sins of omission. One of the biggest such sinners is Germany.
With more and more people fearing the euro's demise, they've taken their funds north. German long-term interest rates have plunged to a ridiculously low 1.46 per cent, below the two "safe havens" of the US and the UK. Pre-euro, this capital flight would have led to rapid appreciation of the German mark.
To fix the eurozone's problems, Germany demands that southern Europeans put their financial houses in order, as if it has no responsibilities itself. The prescription is austerity, the financial equivalent of medieval leeching. Austerity is not the answer. Successful monetary unions are, in one form or another, successful fiscal unions too - which means national sovereignty is sacrificed for the greater good.
The alternative is to head back to economic conditions last seen before the industrial revolution. Then countries got richer only at the expense of others. War, colonisation and slavery were all neat ways of expropriating wealth from other parts of the world. None of that is now taking place in the eurozone, thank goodness, but capital flight is delivering a similar outcome.
This is unsustainable. Germany must declare whether it is prepared to make the necessary sacrifices to save the euro. Otherwise, when the history is written, Germany's sins of omission will surely be seen as one of the key reasons for the euro's eventual collapse. ]

I agree. In the past, I have written in response to a post in FT/Alphaville (FT blog):

My Title: Tectonic plate movement; collusion within the EU 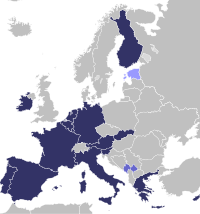 The problem, with most complex problems is that there is no one clear issue to resolve. I would be the last Greek to assume the position that others are to blame. I just try to make a point that the problem Greece is facing is not because of a DNA issue. None the less, the causes of the disease have definitely social, cultural and political roots and much of them have both a Greek origin and name. However, the notion of “non-tax paying Greeks” that don’t work and need a wimp is questionable, if not utterly unjust. Most Greek citizens do pay their taxes and do work hard as indicated by data.
A more radical proof can be witnessed in modern Germany. Just consider that it was Gastarbeiters from the devastated south along with hard working Germans that helped rebuilt this great state out of the wreckage of WWII. (I don’t think we can blame the Greeks for WWI & II too). However, even this great state (of Germany) has had to adjust its international debt obligations, restructure or extent it twice in the 20th century, in order to succeed. The issue, however questionable in some respects, it is sadly true. The London Debt Agreement negotiations lasted from February 27 to August 8, 1953. Greece was among the creditor countries that participated in the Debt relief. I don’t think you think Greece was a financial superpower in 1953, do you?
“For during much of the 20th century, the situation was radically different: after the First World War and again after the Second World War, Germany was the world's largest debtor, and in both cases owed its economic recovery to large-scale debt relief.” Albrecht Ritschl (Professor of Economic History, LSE)
The basic issue today is whether this or any other problem is a European Union one that requires an EU solution. Already, there is a split between the Eurozone and non-Euro EU members, not to mention between the Eurogroup itself. This will resemble the divergent tectonic plate movement unless there is a complete and functional fiscal and monetary union. So far, the convergence theory has not worked properly and this (imo) because convergence, as in tectonic plate movement theory, is collusive in nature.
Αναρτήθηκε από GL στις 15:03